Have a look at the latest article from the RSGB RadCom magazine and see what they have to say about YOTA 2014! Today we started with some very active energizing games from LY and PA, after that the LZ team with the help of some OH radioamateurs gave a short introduction on ARDF and the use of a 80 meter ARDF handheld direction finder. The group was split in three, one started with the ARDF foxhunt, build a slim-jim antenna and morsecode sounder. In the afternoon after the lunch the groups changed activities.

In the evening after dinner we had a nice presentation from Marko OH8WM about R.Net the linking of repeaters in Finland. Some repeaters are linked by internet and some by 2.4 GHz link transceivers. The presentation showed how the network is build up and that the repeaters have to be build up from professional grade equipment to be allowed to share sites with other telecoms equipment. Marko showed some pictures of the network lay-out and repeater locations. Most repeaters are build up using old, but still high grade and standard PMR surplus.

Then it was free- or sauna time and we made a lot of eye-ball QSO’ s.

We started the day with a lovely breakfast in the restaurant and after that we had a nice energizing game. It was about remembering the names of other people and that turned out to be harder then most thought, especially when you have more then 8 names to remember. After that nice game we continued where given name tags from other participants and find them in the crowd and receive a key-cord and nametag-holder. The group moved then to the gym and we got some presentations. The first was from Lisa PA2LS, Tommy ON3TD and Mattias SE0M about the YOTA-december activity, the award and changes in the YOTA website. Then Johan SM5F gave use a presentation about the contest WPX activities at SH3Y and SK3W in 2012 and 2013 in Sweden, where a young team of YOTA operators smashed the SM-records to pieces.

Next presentation was from Jani OH6BG about the webversion of the VOACAP software. In a presentation of about an hour we learned a lot about propagation, but most important how to use this tool for example planning a contest and award hunting. Then the station manager Vili OH5GE gave us the do and don’t of the OH2YOTA station and antenna set-up. After the morning program we went for the restaurant again for a nice warm meal and enjoy about 2 hours of free time before the start of the afternoon program.

The afternoon program was done by the teams of Romania and Finland and had some nice energizing games and tasks. After that we made 7 groups that talked and discussed about the values of the key components in the youth pass. After the discussion everybody gave the results of there discussion and for some it was a bit scary to for the first time in there live present yourself to a big group of people in the English language. After again good dinner, the teams started to build up the international evening where teams can show the best food and drinks from there country. Some had so much food, snacks and candy they could skip the morning breakfast!

Start of the youth exchange!

The arrival of the teams starts after 13:00 hours, when one participant from PA and the SM team arrive. At the same time team Finland is working very hard to build up the OH2YOTA station, get all there stuff out of the cars and make lot’s of phone calls to arrange many things and make sure everybody get’s on the bus from Helsinki airport.

In the late afternoon the bus with 90% of the teams left Helsinki airport for there trip to Virrat.

In two groups the teams enjoyed a lovely pizza dinner at the restaurant.

When the first team had just finished there meal, the bus with most countries arrives. At that time the weather changed and it starts to rain quite heavy, just when everybody wants to get off the bus. Mari and Kati do there best, to give everybody there keys as quick as possible, so everybody could check in there room. But due to the rain the list of rooms and participants got wet and it took longer and longer, but finally everybody had there rooms!

At around 21 hours we had a nice first meeting with all the teams and we got some explanation of the OH-team about some rules and the program for the evening. After that we made a short tour around the site and enjoyed a evening of meeting old friends and making LOT’s of new international friends, most went to bed when the new day started. 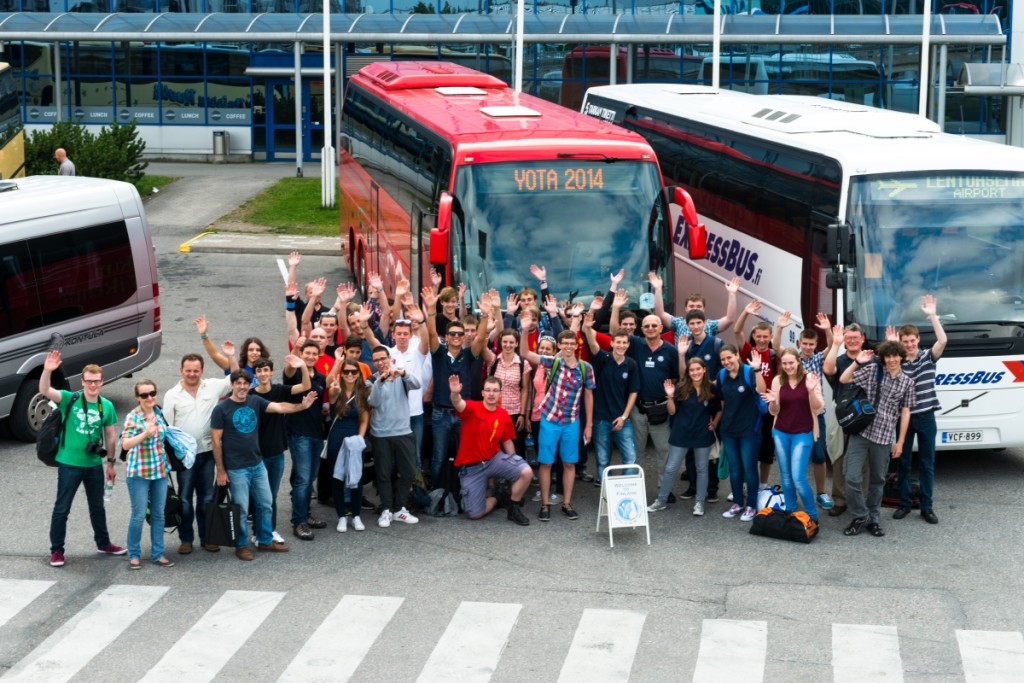 Almost all of the teams have now joined forces at the airport and are heading towards Virrat.