2 reports from participants at the recent Youth Contest Program in Spain at EC2DX station.

“They’re not hearing me.” – “This guy is really strong!” – “Propagation isn’t great.” – “Why have they stopped to talk in the middle of a contest?” – “They’ve stolen my frequency!” and the most important of all, “I made the contact!”.

All of these are exclamations used in an experience that started when my father (EA1UF) called me one day from work to let me know about the the possibiliy of operating in the King of Spain contest, as part of a team including other youngsters, operating from Imanol (EC2DX)’s station.

I decided to accept the invitation and take advantage of the opportunity. I had no idea what to expect, but I told myself that there is always something positive to be had in every occasion, Later on, when I started to get more details, the most attractive and unexpected part was that we would be able to use the Royal callsign EF0F, which would make it an unforgettable experience.

Looking back, what makes me remember that weekend with special affection wasn’t exactly that, rather the whole experience; after 5 long hours drive with my mother EA1ABO, who doesn’t like driving fast (a bicycle could have overtaken us), I felt really well received, the equipment we were going to use was spectacular, nothing like what I‘m used to at home. We got down to business, the two YLs in the team were in charge of 40m, I had never had such a level of rapport with someone I had never met before, we would make signs at each other to keep things fun during the first 8 hours we were voluntarily on the air the first day. But that wasn’t the end of it, nor was the emotion towards the end of the contest. Trying to make contacts right up to the last few seconds… thanks to the wonderful opportunity which I’m very glad to have taken advantage of. I was able to meet a great group of people, both hams and non-hams. I will remember the experience not only because of the radio but also for the laughter and everything I learnt (which was a lot). Overcoming the initial nerves thanks to the help of other team members David EA4AOC, Imanol EC2DX and Roberto EA2RY, who were constantly on hand to help us and give us tips to make the operation easier, and the feeling of “victory” when I looked proudly at my 40m team mate.

Summing up, I think I agree with my fellow operators when we say that although this was a unique and unrepeatable experience. It’s one that I would live out again every year if it were possible.

This experience started with a call from a good friend (Juan EA8RM) who told me that the EA contest club had invited me to take part in the King of Spain contest from Imanol (EC2DX)´sstation, which obviously I accepted without hesitation.

The trip started on thursday when I took a flight via Madrid, arriving at Bilbao around 2330 local time. Imanol and Eider picked me up from the aiport and we spent the night at their house in San Sebastian. Early next morning after a shower and breakfast, we left for the station, which is 200km from San Sebastian. I didn’t know anything about Imanol’s station, I imagined it was a good station but it wasn’t until I got there and saw evrything that I realised how lucky I was to be able to operate from there.

We had only talked on the phone but from the start it was as if we had known each other forever, they were very kind with all of the team. The truth is that I would never have thought I could have had such a good time in one single weekend. The youth team was made of Andrea EA1IZH, Oihane, and myself

We returned to San Sebastian on sunday, stayed the night there, and then Eider took me for a tourist tour round the city. In the afternoon they took me back to the airport for my return trip to EA8.

I didnt just operate from the station, I also was lucky enough to have a long chat with Imanol about his station and the truth is that you learn a lot from a person like him. I though it was marvellous that most of the station is home made, and also Eider is worthy of admiration. She isnt a ham but fits into the ham world perfectly and I though it was unbelievable everything they do to help try to get through to youngsters who are interested in radio.

An experience I would repeat without a doubt. 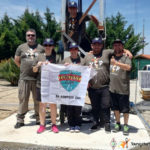 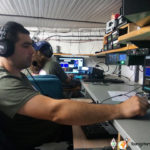 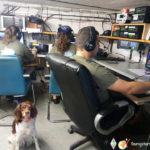 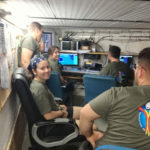