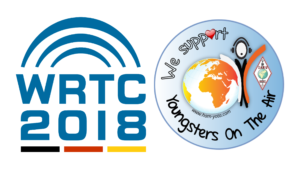 We got the opportunity by the WRTC organizers to be part of the ham radio Olympics 2018 in Germany.
The World Radiosport Team Championship takes place every 4 years in another country.
During IARU HF Championship contest 63 teams from all over the world participate to find the world champion.

Now we have the possibility to send 20 youngsters aged 16 to 26 to be part of the WRTC volunteer team at this mega event located in Wittenberg area. Meet some of the worldwide best-known contesters and have an eye to eye contact with them.
Use your chance and make it yourself a lifelong memory.

Be a part of the Youngsters On The Air team at WRTC 2018 in Germany!

If you want to join fill in the following link.
https://goo.gl/forms/tb2jP6DSdqwwLOgf2