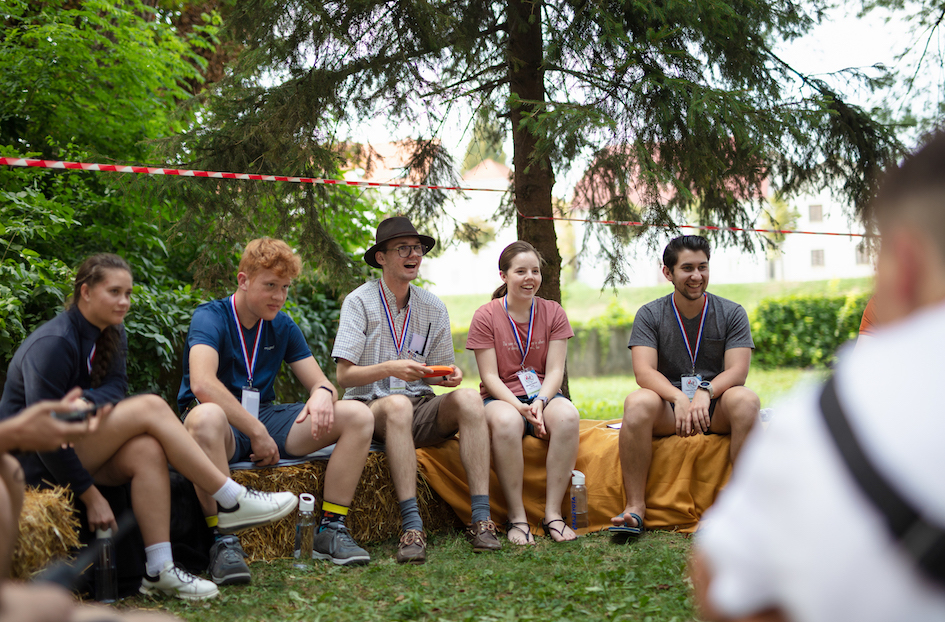 After a long arrival day for some teams, the first day was rather kept short. For the second day of YOTA Summer Camp 2022 many activities had been planned. The day started with breakfast at 7 am. Due to the great weather conditions in Croatia during summer, the food at the camp is served outside. Since everyone gathered for breakfast, the chance has been taken to make a few announcements for everyone. After a short team leader meeting for further alignment, the activities started at 8.30 o’clock with energising games.

For the energisers, the participants gathered in their group for the first time. Each country is assigned to one of four groups and many activities throughout the week will be done within these smaller groups.

After getting to know the group members better as well as getting awake through the energisers, it was time to start with the first workshops. There have been four different workshops each of the same length, so each group was rotating along.

In the first workshop, the youngsters have been thinking about sustainability in ham radio. They have been thinking about sharing a station and that working remotely will help overcome some issues of sustainability. But they also came up with limitations of it. Nevertheless, they were interested in the opportunities it offers them. Especially, since many youngsters are limited in space and money if it comes to setting up a station. They have practically experienced the delay arising from being on air remotely.

After a break, the groups continued with the next workshop. In another one, FT8 has been introduced. The first part consisted of a lecture where they learned about what you need and what to take care of in order to do FT8. Besides the necessary hardware, they learned about WSJT, such that they are well prepared for the practical part. The lecture was continued outside at the station such that the youngsters could also experience the theory at hand!

Before the groups continued with the third activity, there was time for some well-deserved lunch. After some food and a longer lunch break, the workshops continued.

The next part for the group was to learn about the history of the first overall satellites as well as ham radio satellites. Through a combination of theory and practice, the group was learning how to work on satellites, their orbit, and which equipment is needed. The group also learned about the satellite QO-100, a Qatari geostationary. It is reachable from nearly all home countries of the youngsters attending.

After a break, the last workshop for the day has been a soldering project. Each participant was given a “wabbit”, a small ARDF beacon setup. It is a self-designed kit based on an Arduino component. The main part of it has been assembled in the workshop. All youngsters enjoyed the kit building quite much. It was also great to see that not only did supervisors help if something within the kit-building was unclear, but also the participants did so among themselves. The workshop finished with the built main part and the microcontroller will follow in an upcoming workshop.

After all the workshops the youngsters had another well-deserved break. Before the dinner, it was time for the first TTT session.

It started with some history about how TTT started. Of course, also a general introduction has been given and a short overview of the TTT Web page, such that everyone understands the concept behind it better. In order to give more concrete hands-on examples, two teams gave a presentation about youth activities in their country.

Last but not least, it was finally time for the traditional intercultural evening! Every team brought various national food or something that is typical for their countries. To get a rough idea, every team shortly introduced what they have on their table. After that, everyone could walk around to check out everything themselves! Some stayed at their booth while others started to walk around. So that way everyone could get in touch with each other throughout the evening.

And simultaneously you got to know many different peculiarities, some even brought some souvenirs or wear their traditional clothing, and QSL cards were exchanged. And with all these different flavors and impressions, the second day of YOTA summer camp came to an end.